Synthesis – The Solar Brotherhood, told by the Apus (English) 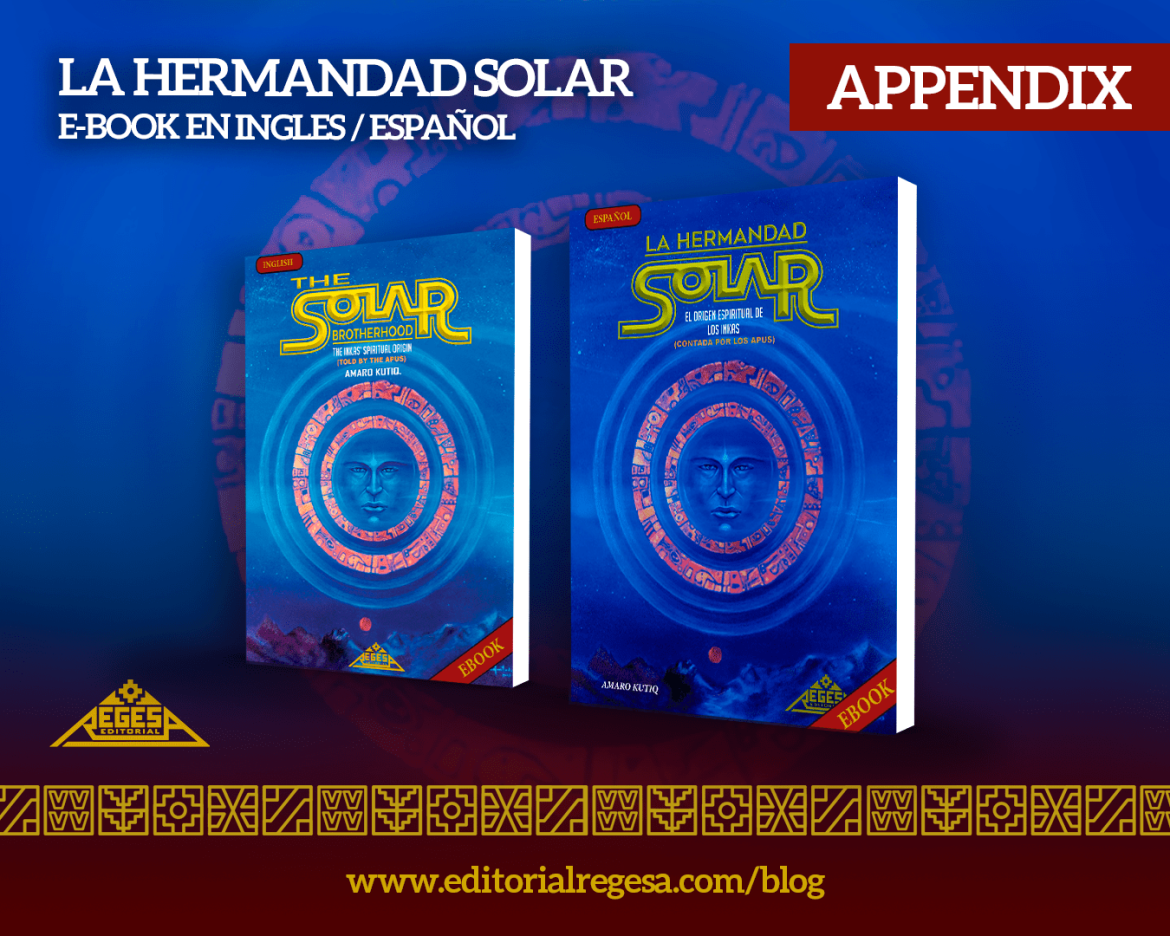 Synthesis – The Solar Brotherhood, told by the Apus (English)

The Solar Brotherhood, Told by the Apus constitutes a faithful testimony of the Andean Live Experience that always oscillated between Myth and Reality, since its Stellar Origins, with the arrival of highly Evolved Beings to the Earth, many thousands of years ago, who founded a Great Mother Civilization, on what was, back then, the Continent of Mu, in the Pacific Ocean.

On their long journey, through sidereal space, these Masters brought the Great Solar Disk to the Earth, with the intention of vivifying and honoring Life, in its most elevated sense, with its Powerful Energy. After the cataclysm that sunk Mu, Master and High Priest Aramu Muru safeguarded the Solar Disk, in a Sanctuary situated beneath Lake Titicaca, where he founded the Solar Brotherhood, together with some other Masters; survivors of that terrible catastrophe.

There, they prepared a couple of humans; Manqo Qhapaq and Mama Oqllo, so that they might assume the delicate Mission of taking the Solar Disk to a fertile valley, where they would found a Sacred City, from which a Great Civilization would develop. Thus, with the orientation of a gold object, and accompanied by a group of Priests and Initiates, the couple got to the Aqja Valley which they re-baptized with the denomination of ‘Qosqo’ (Cusco), and where they found the adequate conditions to found the New Inkan Civilization and Culture. Indeed, this was the most propitious place on the planet, for the Great Solar Disk´s permanent location.

Then, together with his Priests and Initiates, Manqo Qhapaq starts a long and dangerous march across the Andes, to take the Great Solar Disk to Qosqo, where the Apus (Great Spirits of the Sacred Mountains) had built a huge Temple and Sanctuary, to shelter the Solar Disk, and which, today, we call ‘Saqsayhuaman’, on top of a hill, Northwest of the Sacred City of Qosqo.

Obviously, intuiting that certain readers might speculate that this narration, with apparent novelistic hues, might be based on the fantasy of a very creative and imaginative mind, we want to assure you that it is the Masterly Testimony of a Member of the White Brotherhood who personally delivered the present Work´s manuscript to the Editor, as a contribution to the Apocalypse Process, in the original sense of the Greek word; that is, Revelation, which Humanity is living, nowadays, in its massive Consciousness Awakening, and that will take it to its next Evolutionary Stage, with the entering of this Solar System in the Photon Belt of Alcyone; the Largest Star of the Pleiades´ Constellation, and in an inexorable Ascension towards the Fifth Dimension, with an eventual return to what we call ‘The Angelical Realm’.

In the external story it narrates, this Work reveals Arcane Knowledge that are within the reach of whoever honestly wishes to discover them. Enriched with over 80 original paintings, by Peruvian painter Carlos Apolinar Hurtado Gálvez, and complemented by addenda written by the Editor of this Work, and its Translator to American English, ‘The Solar Brotherhood’ is a unique book, full of Elevated Knowledge and Great Teachings, within reach of any reader interested in knowing more about the origins of Humanity and of the Inkan Civilization, and to rediscover values that, today, have gotten lost in the tangled meanders of History which, in so many cases, has been manipulated, altered or, simply, occulted, to serve the interests of this world´s powerful who always have kept the best to themselves, to dominate Humanity, and submit it to their yoke.

Certainly, if you are a passionate seeker of the Light and Truth, this Masterly Work, worthy of figuring among the Human Past´s Great Testimonies, with clear Vision and Perspective towards the future, must be yours, to enjoy and share, to spread its Luminous Message of Faith and Conviction in a Better Future which is about to become Reality.

APPENDIX – THE SOLAR BROTHERHOOD IN ENGLISH – By Alain P. GoormaghtighDescarga

Read the complete book of The Solar Brotherhood:

WhatsApp Chat is free, download and try it now here!